Day Two kicked off with a short talk from nVidia about optimizing for the Tegra. Its incredible how much horsepower is in mobile devices nowadays. 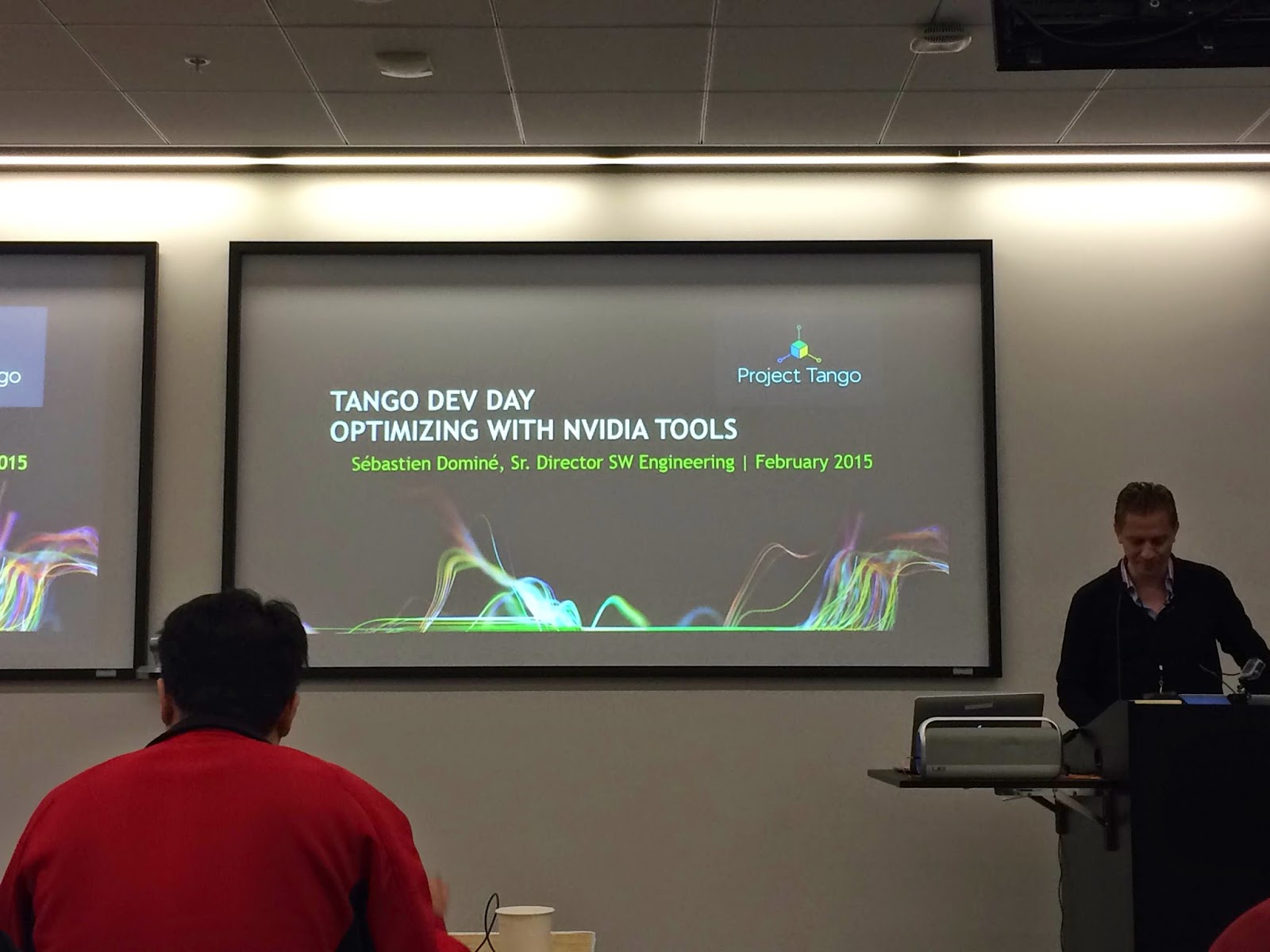 NVYVE was the next presentation, showing us a Project Tango app where you pilot a news chopper around a city, all controlled with the Tango. They showed off both on-screen controls (virtual thumbsticks) and controls using Project Tango's Motion Tracking abilities along with a multiplayer mode.
After NVYVE was Left Field Labs, showing off their Tango projects: Animal Abduction and SoundScape. Both demos were very creative and fun. The crew at Left Field Labs was a friendly and awesome bunch. Keep an eye on these guys! 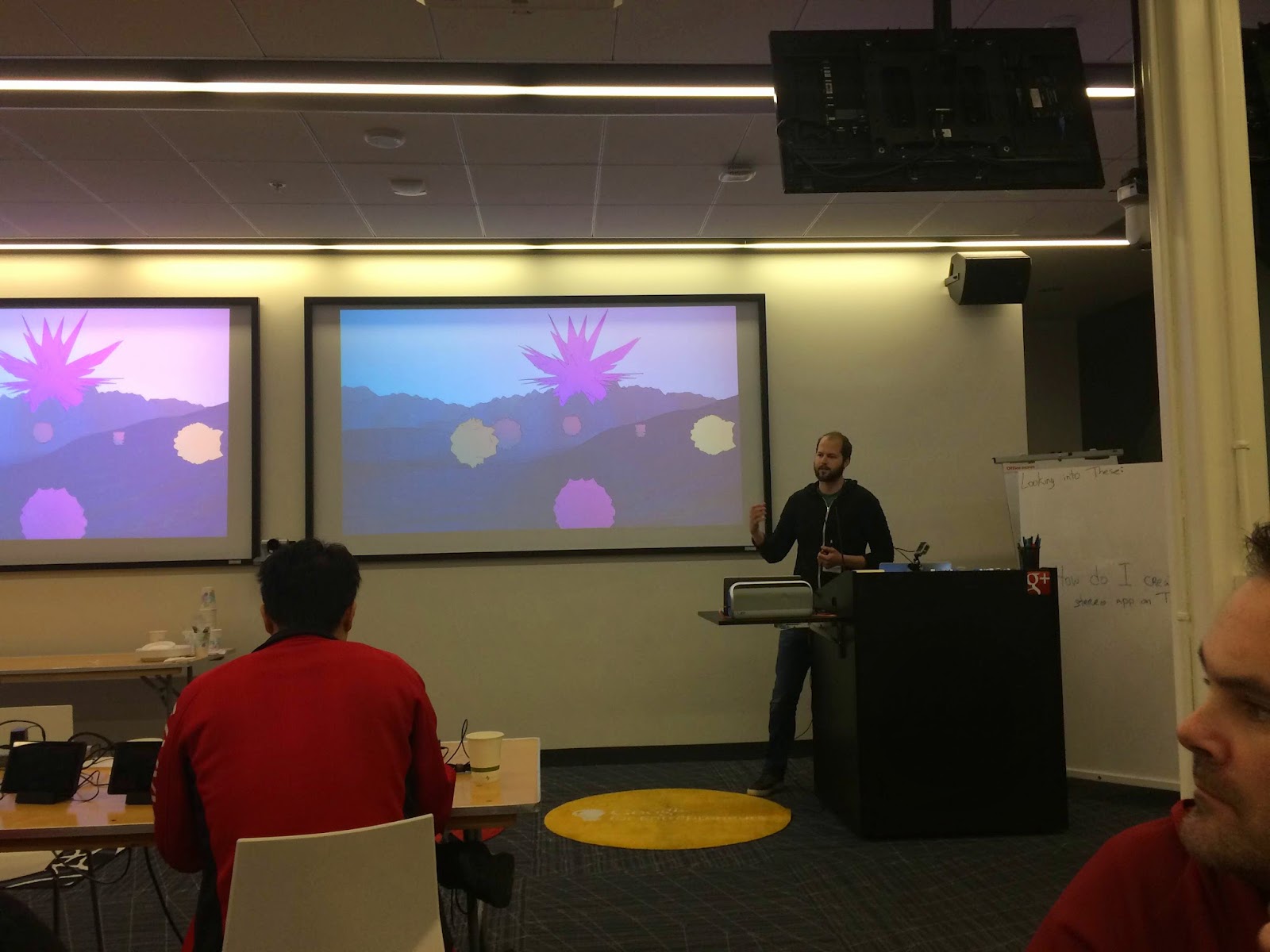 After the presentations, we worked on our demos for the remainder of the day until it was time to present.
On the first day, I ported my upcoming VR experience, PolyFish, to the Project Tango to experiment with motion control. It was amazing being able to walk around a physical environment and have it correspond to the virtual environment. On Day 2 I focused on expanding the practical side of Tango's sensors.  After a few close calls running into obstacles, I hacked together an in-game warning icon that uses the Tango's depth sensor. Working with the depth sensor requires working with point clouds, I've never done that before, but it was fairly straightforward using the Tango API to measure distances. Using the point cloud to get this simple data felt like overkill, but when it worked, it worked well. I almost wished there was a simple laser measuring device on the Tango (like you can get at a home improvement store) to make collisions a little more straightforward.
Once the PolyFish demo was in a good spot, I moved on to mother other passion: Faceted Flight. For the Faceted Flight demo, I wanted to use the Tango as both a level creation tool and a the controller for the game. 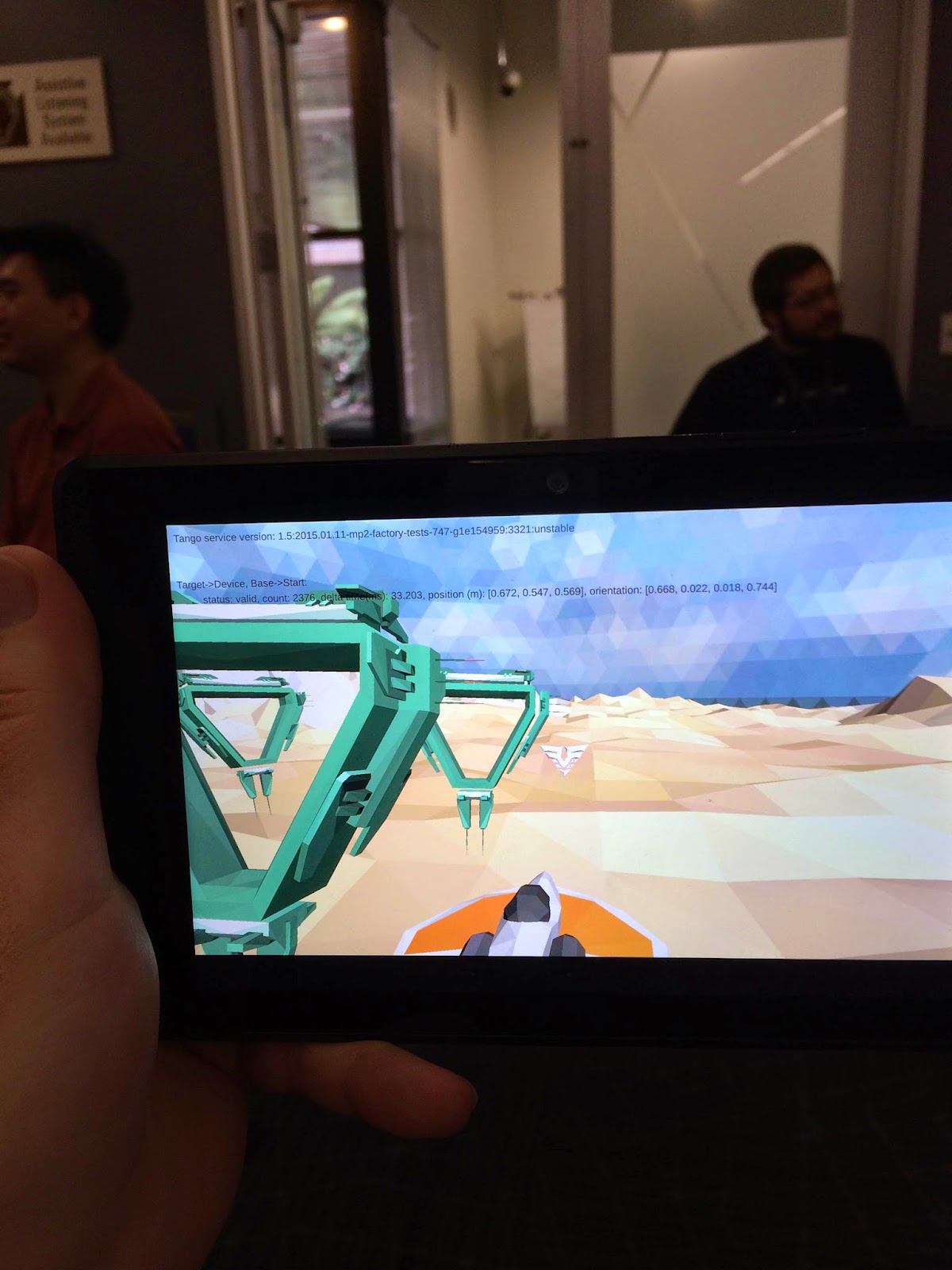 In the Faceted Flight: Tango experience, players would look through the tablet and see an empty landscape and a transparent floating ring in front of them. When players tap the screen, a ring was placed in the level. Players were able to walk around the conference room, which was akin to walking around the environment. As they walked around they could build the level by placing rings. Once the player is ready, they can then "fly" through the level, but walking around the conf room and steering the ship through the rings. It was rough as hell, but showed a good amount of potential for fun times.

At the end of Day 2 we presented our demos to the group. The teams ranged from single people to 6 person teams, and the content shown was great. The winners of the demo day were Loot Crate and SphereOS. Awesome teams, all around.